The trio of Clifford Enosoregbe, Thomas Otu and Henry Atseye will be in action at the Lagos Open International Tennis Championships when hostilities resume on Tuesday, 9 October, and their mission is simple. To win where their counterparts have failed.

Wins for the players in their first round matches will erase the gloom that filled the activities of the first day where all the Nigerian players in the Men’s Singles were beaten by their more experienced opponents. 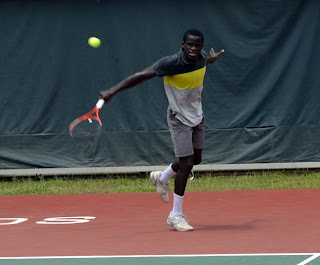 Otu will start the charge for the Nigerians when he takes on tournament’s number two player, Benjamin Lock on centre court while Enosoregbe will have to be at his very best when he comes up against tournament’s number one seed, Tom Jomby, in the second match on court 1.

Atseye on the other hand will be playing on court 3, against Tukhula Jacobs. The one time quarterfinalist at the championship will hope to rediscover the form that helped him win the inaugural edition of Rainoil Tennis Championship in Lagos.

Ireland-based Adebola Obasoto will also have his hands full when he plays against Alexis Klegou from Benin Republic in one of the morning matches.

Nigerian Tennis Live will keep tabs on the players’ performances and report to our teeming audience as the results come in.