All for Joomla All for Webmasters
Breaking News
Home / Uncategorized / WEEKEND SPECIAL: How Oyinlomo, MaryLove, Bulus, Others Will Dominate Nigerian Tennis

Nigerian tennis is believed to be experiencing an unusual paradigm shift from what has been obtainable in the recent past.

Observers had clamoured for a development of the sport at the grassroots level in order to have a smooth transition for the players as the older ones keep moving out of the picture, but this had not been heeded by the administrators and stakeholders.

This will no longer be the case in the next two years, Naija Tennis Special‘s guest analyst, Coach Abel Ubiebi, explains. 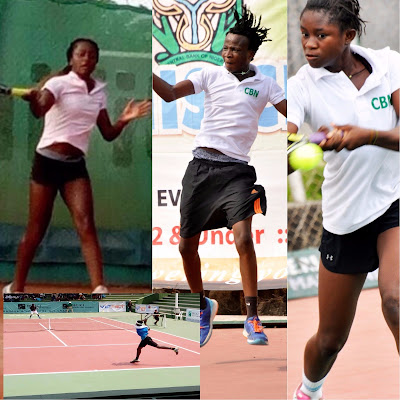 According to the US-trained tennis coach and grassroots development expert, these players are the future of Nigerian tennis especially since the senior players are beginning to phase out.

This young and amazing fighter has not ceased to amaze tennis lovers and followers within and outside the country with endless performances at the highest level.

Apart from being one of best young players in Africa in her age category, Oyinlomo is giving top world players head and heart aches with her unprecedented successes in recent years.

At the recently-concluded World Junior Tennis Championship in Tunisia, the Morocco-based youngster was Nigeria’s shining light in a tournament which ended with mixed feelings for the country’s representatives that made it to the North African country.

This talented youngster is one of Nigeria’s biggest tennis exports, especially in the junior cadre.

She has won so many championships in the country and is fast becoming one of the most sought-after tennis juniors.

Her recent exposure to international tennis courtesy of her sponsor (Temple Management) has further shot her up the ladder in Nigerian tennis.

Playing to the final of a major national tournament (the 2017 CBN Open) boosted her national status and apart from the hundreds of thousands that she pocketed at the end of the championship, she shot into the top four in the country; the first time a person of her age made it that far.

She lost her mother a few years ago in a rather controversial manner and this set her tennis back a little bit. But she got over it and continued to rule Nigerian tennis while benefiting from the experience of playing almost all her life in Dubai, the United Arab Emirates.

Angel, as the half caste is fondly called by every tennis follower and observer, is believed to be among the players who will hoist Nigeria’s flag high in the coming years, having already shone like a million in previous junior tournaments.

In 2018, the former Dubai-based youngster is among the junior players who are expected to take over from the seniors at all levels.

This is one promising player who is also a ‘book freak’. He combines his love for tennis with that which he has for his academics in such a way that one would think he may not excel in both, but this is not the case.

Selected to represent Nigeria at the Commonwealth Games in a few days, Bulus is a 16-year-old youngster whose future seems brighter than the blue skies, especially with the pace he has been going in the game of tennis.

He had to be dropped from the team following a report that he had to sit for an examination the same period as the tournament, a clear signal that although he is passionate about tennis, he is even bothered about his academics and wants to make the country proud as often as he can.

The teenager also recently won ITF/CAT tournaments while representing Nigeria and with his quarterfinal feat at the recent CBN Open, Bulus looks to be ready to take over from the senior players in the country.

Itodo seems to have paid his dues in the junior category already, having won so many championships back-to-back facing stiff competition from his namesake, Chris Bulus.

His impromptu invitation to replace his ‘rival’ confirms the trust that team selectors have in him as one of the Nigerian players to set the court on fire.

The Kaduna-based tennis youngster – like Sylvester Emmanuel – is blessed with a strong stamina and a never-say-die attitude when in top flight. With a little more consistency, Itodo will surely shock the senior players and alongside Bulus, give the more established ones a run for their dough.

Anybody who is familiar with junior tennis in Africa is most likely to have heard the name, Osewa, before.

His popularity is as synonymous to his performance that he got a scholarship courtesy of the ITF to further hone his skills in the game.

The dread-wearing tennis champ is certainly one of the players that Nigerians will be hoping to bring glory to the country and help phase out the ‘tiring’ seniors who still claim monopoly over the sport in the country.

2017-07-15
Our Correspondent
Previous: Check Out Pictures From Mini Junior Tourney By Dubai-based Ex-National Player
Next: Team Nigeria Land In Egypt Ahead Of Davis Cup Competition (Photos)