The week-long NNPC Junior Circuit was brought to an entertaining finale on Saturday as the Onoja siblings, Iye, 8 and Neku, 11, gave the audience at the Murtala Square, Kaduna, a spectacle with their U-12 final match on Saturday.
Iye, the younger Onoja lived up to the pre-match billing as she spanked Neku, 9-1 to win the elusive U-12 girls trophy for the first time.
An elated Iye told Naija Tennis Special after the match, that she was glad to win although she would have loved to allow her sister win three games.
“She kept having fault serves, that was how I could easily defeat her. Neku was not happy with me after the match and was just crying, but I was even fair not to have defeated her 9-0.
“The reason she does not play better than 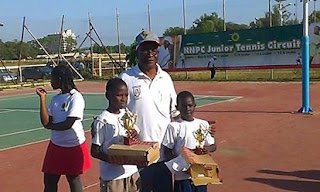 I do is that she goes to school more than I do and I train harder than she does. There’s no big deal in the win but I am very happy to have won, ” an ecstatic Iye said.
In the girls U-14 final, Angel McCleod was made to battle for her 9-5 defeat of crowd favourite, MaryLove Edwards, who showed her technical ability during the game.
The younger Edwards trailing 2-7 found some rhythm and confidence to win three straight games to narrow the score to 7-5 but McCleod, sensing danger, stepped up her game with three aces in two games to win the game.
Edwards, who has now lost three consecutive finals to McCloed, has however, vowed to regain her title which she had been accustomed to retaining.
Chris Itodo from Kaduna regained the Boys 16 title he lost at the SNEPCo Junior Tennis Championship in October by beating Chris Bulus from Lagos 9-5.
Itodo took full advantage of a loud home support and peeled away with the score tied at 4-4, dropping only one more game to win the match.
Gabriel Friday from Kaduna whitewashed teammate Benjamin Ayuba 9-0 to win the Boys 14 title while Usman Kushima from Abeokuta won the boys 12 crown by defeating Musa Yahaya from Kano 9-7. Abdullahi Ajanaku from Lagos retained his Boys 10 crown by edging a very talented and hard hitting Gabriel Richard also from Lagos 9-3 in a match where the score did not reflect the closeness and quality of the match.
It was no surprise that the runner-up from the VGC Club got a standing ovation when he was awarded the most outstanding player trophy for the boys. The most outstanding player trophy for the girls, which was also well applauded went to Favour Moses from Kaduna.
The thirteen year old lost 9-1 to McCleod in the semifinals of the Girls 14 but showed remarkable improvement from the last tournament in October.
The week-long tournament is part of the International Tennis Academy, ITA Junior Tennis Circuit which provides a veritable platform for young players from clubs, schools and State programs to showcase their talent.
Godwin Kienka, Director of the ITA expressed great pleasure at the outcome of the tournament, especially with the level of improvement on display.
He said: “In fact, the players have proven to us that what we are doing is not a waste of time or energy. They have toughened up and stepped up their games.
“Gabriel from the VGC Tennis Club was also a revelation, please watch out for him in subsequent editions. Our sponsors have also been fantastic, we are indeed grateful.”