All for Joomla All for Webmasters
Breaking News
Home / Uncategorized / Nigerian Tennis: From Bad To Worse In 2013? 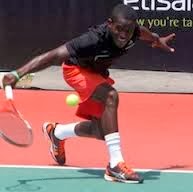 Nigerian tennis in the outgoing year looked like a normal routine for the tennis players as all the events they have been participating in took place without any form of improvement.
The first quarter of this year started with the Nigerian Tennis Federation, NTF, informing that the year would be busy with tennis activities especially with the zonal championships, a promise which they are yet to fulfil. The African Junior Championship, AJC Qualifiers also took centre stage, with Emmanuel Idoko, Sarah Adegoke, among others, picking Nigeria’s ticket.
Top wheelchair tennis player, Alex Adewale also withdrew from the African wheelchair tennis action in Kenya as he decided to take a break from tennis for reasons he kept personal. Wasiu Yusuf and Jude Uwaze-who replaced Adewale, won the Championship in Kenya and qualified Nigeria for the World Championship in Turkey.
Nigerian players lamented the dearth of tourneys in the country as one of the country’s top players, Sanni Adamu, explained that it is hard to survive as a Nigerian tennis player. Samuel Omoile shared his dream with P.M. NEWS Tennis Special as he strives hard to be among the top 200 players in the world.
The Central Bank of Nigeria, CBN hosted a junior championship in Lagos and the young players who have grown through the ranks were celebrated while the wheelchair tennis players clamoured for tournaments to make them better. The discovery of young prodigy, Mary-Love Edwards also became a talk of the town as she started showing signs of excellence with her displays on court.
P.M. NEWS Tennis Special reported exclusively, how wheelchair tennis would make its entrant into the Annual Central Bank of Nigeria, CBN Open and a local player, Kehinde Alade, lamenting the dearth of local tourneys in the country. Bolaji Olawepo also stated that he was ready to dump Nigeria if an opportunity presented itself.
The second quarter started with national coach of the junior tennis players, attributing his players’ performance at the AJC-where Nigeria lost the top spot to Ghana- on inexperience. Former junior player, Umaru Balami, also explained why Nigerian players fail to perform well at the Governor’s Cup Lagos Tennis Championship.
NTF informed that no dates had been decided yet for the expected CBN Senior Open as modalities were still being worked on. Meanwhile, top female tennis player, Christine Agugbom, expressed her love for Serena Williams just as Taiwo Owolabi explained to our correspondent how he met his wife when he was a ball boy.
Vice-President of NTF, Mr. Yemi Owoyemi, affirmed that tennis is one of the sports in the country which can win Olympic medals as the players prepared for the Central Bank of Nigeria, CBN Open. Henry Atseye won the tournament and he led other Nigerian players to the Davis Cup in Cairo, Egypt where Nigeria’s performance-maintaining world Group III- was lauded by the Federation’s President.
The wheelchair tennis players also had something to cheer about as they featured in the CBN Open for the first time, thanks to the Federation’s constant appeal to the sponsors to ensure the inclusion of the disabled sport for the first time.
The new board of the tennis federation was constituted with Engr. Sani Ndanusa returning as the president and P.M. NEWS Tennis Special reviwed the task ahead of them.
The demise of the first vice-president of the federation, Harry Tonye in October, shook the entire tennis fraternity as he suffered a relapse of an ailment in Algeria.
The annual Governor’s Cup Lagos Tennis Championship started the last quarter of the year and in what is fast becoming a trend during the International Tennis Federation, ITF-rated circuit, Nigerian players failed to move beyond the second round as their foreign counterparts stole the show, thereby missing out on the Local Organising Committee’s largesse of sending the best player to an African circuit.
Despite the fact that the players performed below expectations, there was still ample time for them to redeem their image as the 27th Dala Hard Court Tourney took centre stage in Kano and Clifford Enosoregbe won the tournament to end the year as Nigeria’s top player for the first time in his career.
The Edo-born tennis star was also named the country’s number one tennis star in December to cap a fine year for the twenty-four year old.
For veteran tennis player, Shehu Lawal, the outgoing year is “better forgotten because there was nothing different from what we used to have. Maybe it even went from bad to worse”, he told P.M. NEWS Tennis Special.
Lawal also added that, “I thought that things would change for the better but there has been no difference for about two to three years now”.
Meanwhile, president of the Federation, Engr. Sani Ndanusa believes that the year was not as bad as it may have been perceived.
According to Nigeria Olympic Committee, NOC President, the federation achieved about 85% of the things they set out to do in the year, this he maintained cannot be regarded as failure.
“The year has come and gone and we can only look forward to the future. We achieved about 85% of our plan so we can’t say that we failed, that is not to say that there were no challenges, though.
“We just want to allow the outgoing year rest but that does not mean that we did not achieve successes or improvements in certain areas. It was not bad after all” Ndanusa explained.