Bridget Chidi, a female Nigerian tennis player, is dead.
Information reaching Naija Tennis Special has it that the Nigerian player passed on over the weekend due to some complications associated with childbirth.
Although there were no details of the activities that led to her death, Naija Tennis Special’s source disclosed that the late Bridget died while trying to bring an infant into this world.
Her demise has already thrown the tennis family into a frenzy as her colleagues could not believe that she had passed on, especially her close friends and associates.
A check on Facebook showed her colleagues sending their condolences as soon as they got the information, with Engr. Ifedayo Akindoju, the president of the Nigeria Tennis Federation (NTF), also sending his condolences to the family of the bereaved.
Below are some screenshots from the mourners as obtained by our correspondent: 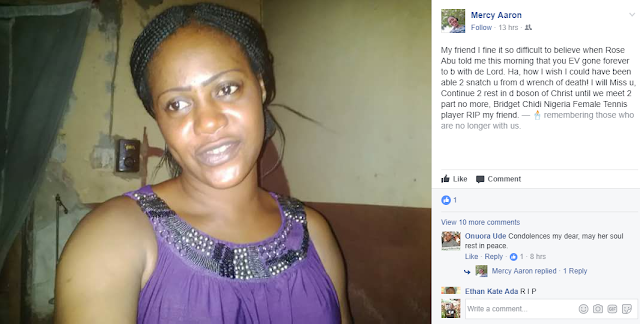 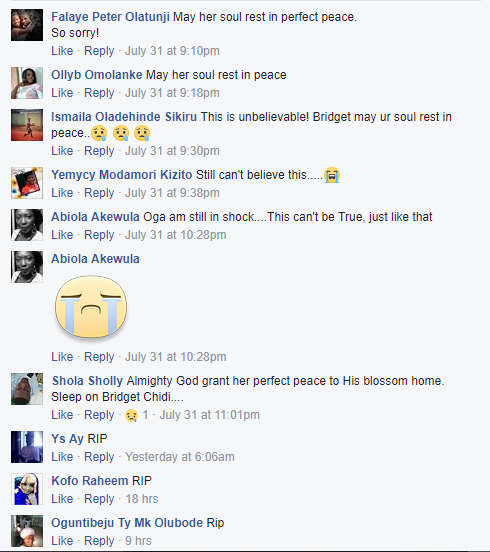 The late Bridget played alongside the likes of Fatimah Abinu, Blessing Samuel, Christie Agugbom, and a host of other top national players during the first PYW National Championships in Nigeria.
Her demise is coming barely two years after the tragic death of Beauty McCleod, another female tennis player, who was killed by policemen in Lagos over an argument.
2017-08-02
Our Correspondent
Previous: ‘MaryLove Will Be A World Champion In 5 Years’
Next: Nigeria’s Serena Jets Out To London For 2-week Training