The unassailable lead of Nigeria’s Oyinlomo Quadre in junior championships was further confirmed on Thursday, 20 September, when the youngster upset a top seed at the ITF U-18 Junior Circuit in Cotonou, Benin Republic.
After bossing two of the three finals she’s played in so far, the Nigerian youngster defeated Carmine Becoude the number four seed from Benin Republic in two straight sets of 7-6(1), 6-0, to qualify for the semis of the ITF junior championship. 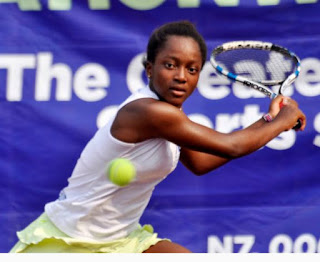 Nigerian Tennis Live reports that this is the third time in four weeks that the youngster is playing at this stage of the competition.
With this win, the Nigerian junior star will meet India’s Gaud Bhagia the tournament’s number seven seed, in the semifinal as she looks forward to a second consecutive berth in the final.
Her male counterpart, Abayomi Phillips, was not so lucky, as he lost in a thrilling final set match against the tournament’s number three seed.
This result means that Oyinlomo is the only Nigerian player remaining in the tournament and stands a chance of doing the country proud by playing in and winning the second final in two weeks.
Nigerian Tennis Live will keep tabs with the performance of the player in Benin Republic as the competition comes to and end, and report details of the match.
2018-09-20
Our Correspondent
Previous: ITF U-18 Junior Circuit: Abayomi Faces Litmus Test As Oyinlomo Braces Up For Semis Ticket
Next: ITF U-18 Junior Circuit: Oyinlomo Wins 2nd Consecutive Doubles Title, Qualifies For Singles Final