Posted by: Our Correspondent in Uncategorized February 2, 2018 0 299 Views

It is no longer news that 2017 ended on a fantastic note for some of Nigeria’s young players, especially the likes of Joseph Imeh and Christopher Bulus; both of whom were arguably Nigeria’s fittest players of the outgone year.

As a reward for his hard work throughout the year, Imeh ended as Nigeria’s number one player, while Bulus gained admission to study and continue his tennis development at a Military University in Mexico.

As the new tennis season is set to kick off with some tournaments, Nigerian Tennis Live thought it wise to refresh Nigerians’ minds with the players’ rankings and to see which of them can maintain the rankings or get better in the course of the year.

While Imeh overtook Abdulmumin Babalola as the country’s number one male tennis player, Thomas Out came in third as the former number one player could not hold on to his spot in spite of his Dala Open defeat of Imeh.

In the female category, Sarah Adegoke seems to be running away with the number one pot as she maintained during a recent interview that even though she prefers more ITF titles, she is not ready to relinquish the number one spot.

Blessing Samuel is in hot pursuit of the Rainoil Tennis Open defending champion in second place, while tireless and ageless Christine Agugbom stays third on the log. Patience Onembamhion and Marylove Edwards are closely following in fourth and fifth places respectively.

Below are the rankings of top 20 Nigerian male and female players: 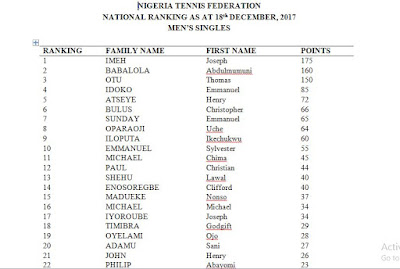 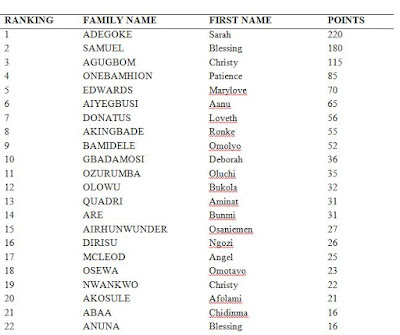 2018-02-02
Our Correspondent
Previous: ITF Releases Dates For Abuja Futures 1-3; Check it Out
Next: Meet Oiza Yakubu, The 12-Year-Old Wizkid Dominating U-16 Competitions (Photos)