The Nigerian contingent to Kenya for the Davis Cup tournament have started on a very impressive note, winning all three matches with impeccable results.
Nigeria is in Pool A of the Africa Zone Group III alongside opponents from Rwanda, Benin and Cameroon. 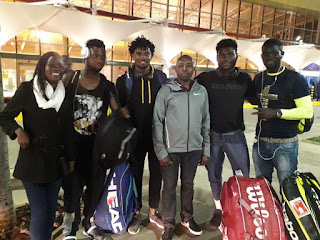 In what appeared to be the first and toughest match of the day on Tuesday morning, Sylvester Emmanuel defeated Rwanda’s Ernest Habiyambere in two straight sets of 6-1, 7-5 while Nigeria’s number one player, Joseph Imeh needed just 48 minutes to see off Rwanda’s captain, Olivier Havugimana in a 6-0, 6-1 game.
Imeh would later pair Christian Paul in the doubles event to get the better of Hamissi Gatete and Etienne Niyigena in two straight sets of 6-1, 6-2.
With this result, the Nigerian side is strongly placed to win the pool and stand a chance to gain promotion to Group 2 of the African zone, a task which has seemed difficult for the team for some years now.
Nigerian Tennis Live will keep tabs on the players’ performance in Kenya and report as they unfold.
2018-06-19
Our Correspondent
Previous: 2018 CBN Open: Will Organisers Increase The Prize Money To Celebrate 40th Anniversary?
Next: Organisers Retain Prize Money, Draws For Men/Women Singles For 2018 CBN Open