Sylvester Emmanuel has defeated Abdulmumin Babalola 3-6, 7-6, 6-4 to emerge as the winner of the 40th edition of the Central Bank of Nigeria (CBN) Senior Open Tennis Championship, Nigerian Tennis Live can report.
The youngster stunned the Ibadan-based tennis legend during a match which was described as being tough by spectators at the National Stadium, Abuja. 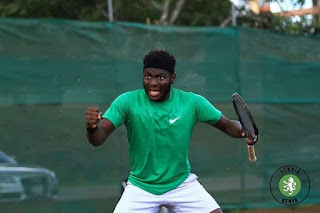 Babalola had won 6-3 in the first set in an amazing fashion, but the youngster rallied to win the second set in a tie breaker even though the latter was serving for the match.
The final set was so much of a formality for the former Dala Hard Court tournament champion, who raced to a 6-4 win and a loud chant of victory.
It was a roar of ‘victory at last’ for the Nigerian superstar who is winning the championship for the first time since the history of the tournament.
His win is also historic as Sylvester is the winner of the 40th edition of the tournament having been born about 20 years after the first edition took place.
Nigerian Tennis Live will bring the pictures from the tournament and award presentation as soon as they come in.
2018-06-30
Our Correspondent
Previous: MUST READ: 4 Reasons Sylvester May Defeat Babalola In 2018 CBN Open Final
Next: Check Out Action Pictures From The Grand Finale Of the 40th CBN Open In Abuja