The Nigeria Tennis Federation (NTF) has finally released the calendar of activities for the 2018 tennis season.

The document obtained by Nigerian Tennis Live showed that the Central Bank of Nigeria (CBN) which was initially mooted to be hosted in Abuja has been confirmed for same venue, a development which may not go down well with some players.

On the calendar also, was an explanation that the junior championships which were already talked about were not listed because of a few delays with some of the sponsors of such tournaments.

The President of the  NTF, Engr. Dayo Akindoju, who explained some challenges of the federation in the wake of the decisions to make with some of the tournaments expected to kick start in 2018 as promised in 2017.

“Right now, I can assure you that we have seven to eight tournaments that we can host at any time of the year that we want to, but the challenge has been fixing a suitable time and venue that will favour the sponsors.

“For instance, some may want it in their states and the place may not be good enough to host a tournament for junior players, it means we cannot hold it there. This has really posed some kind of challenge to us in planning, I must confess.

“But we are really working hard to make these things work out, that’s actually the reason this calendar release was delayed till this time. Kindly bear with us, we are putting in a lot of efforts,” he stated.

Below is the calendar of activities as obtained by Nigerian Tennis Live: 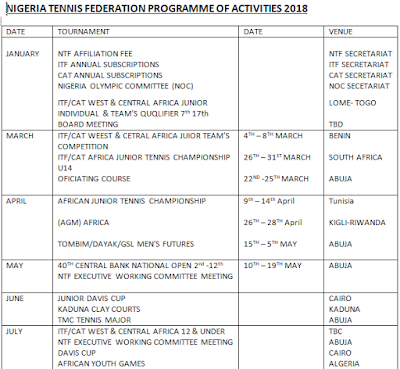 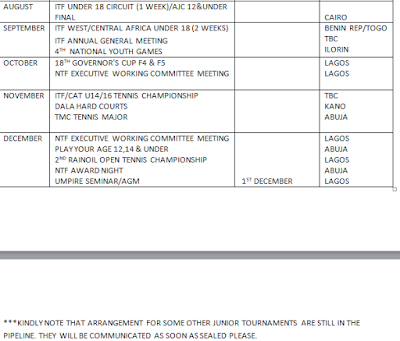