According to an online poll conducted by Nigerian Tennis Live, Anu had the most of the over 200 votes cast by tennis followers and friends of the tennis players who consistently stormed the social media handle to cast their votes.

Sarah Adegoke, Anu Ayegbusi, Christie Agugbom and Blessing Samuel were all nominated for the category to determine who people believe is the best in the outgoing year, having initially determined the young player of the year.

At the start of the voting, Adegoke appeared to be a fans’ favourite to win having amassed more trophies in 2017 than any other female Nigerian player, but the table suddenly turned when Anu’s friends and fans stormed @naijatennis, the official Twitter handle of this tennis blog, to vote their friend.

The pendulum kept swinging as more people turned up for Adegoke and she took the lead again in a two-horse race online, but the moving train landed in Anu’s favour as she got the most votes at the end of the voting period.

At the end of the voting, Anu got an astounding 63% of the 214 votes while Adegoke could only manage 35% to come second while Blessing Samuel, the winner of the 2017 Dala Hard Court tournament chalked up 2% of the votes as Agugbom had no votes.

With this, Anu, a graduate of the University of Port Harcourt, emerged as Nigerian Tennis Live‘s most outstanding female player in Nigeria for the year 2017.

There are three more categories to be voted for before the end of the year as this tennis blog seeks to confirm our followers’ favourites in tennis for the year 2017.

See how people voted below: 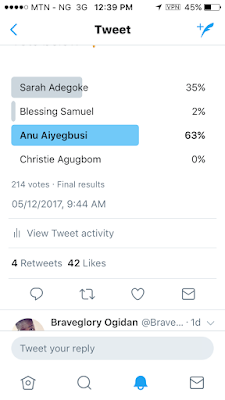