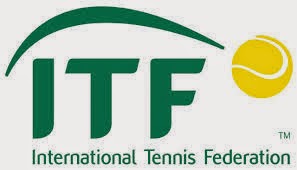 Nigeria’s return of a bronze medal at the recent African Junior Tennis Championship, AJTC in Tunisia, may have earned Michael Osewa, one of Nigeria’s shining stars, an ITF Scholarship, Naija Tennis Special can report.
National junior tennis coach, who spoke with Naija Tennis Special on arrival from the North African country, explained that the players got high ratings and made it far in the competition as against previous standings.
The Nigerian Boys’ U-14 star player, Osewa got to the semifinal in the Singles’ event and eventually won bronze for his efforts.
There were also appearances in the Girls- 16 Q/final, Boys’-14 doubles’ Q/final as well as Boys’-16 Q/final which the coach was really excited about, especially since the players’ preparations were not as strong as they expected.
“I must tell you sincerely that the players did very well. They put up brave performances despite the cold in that region. I was very happy particularly for the performance and improvement of Michael Osewa, who won bronze for us.
“The AJTC proper is always very tough because of the calibre of players that are present there, but we went there and showed that we are capable of ruling Africa in no distant future,” an elated Ubale said.
Our correspondent scooped also that Osewa’s bronze feat at the annual event- the only medal for a West African country at the tournament- may have put in him a pole position to enjoy the regular ITF scholarship for outstanding players.
Ubale noted that, “Osewa is likely to get the scholarship because he did really well before and during the competition. It will not come as a surprise if he gets the scholarship from the ITF when they decide to reward the players.”
2015-04-10
Our Correspondent
Previous: NCC Tennis League Will Unite Nigerians- Kienka
Next: Germany, Spain, Brazil, Others Set For N3.3m Abuja Futures